It’s New Year. Let’s not go for New You when Better You is fine….

It’s New Year. Let’s not go for New You!

Another New Year and this one brings a new decade. The papers and social medial are full of photos and posts about how we’ve changed. Young twenty-somethings, who in 2010 were stumbling out of parties and living in their parents’ homes, are now themselves mortgage encumbered parents. Those of us who are whistling through our 50’s are counting our pension pots and unrecognisable from the photo booth shots we took so many of in the 70’s and 80’s.

So is the old, and rather hackneyed, mantra of ‘New Year, New You’ just adding pressure to an already boiling pot of worry and, for most of us,  at least some regret? Why should there even be a New Me? This Me is the one I’ve been working on for a very long time and for all its faults it’s done pretty well. I will concede that there is some room for improvement which is why this year, at the beginning of the decade, I’m simply aiming for Better Me.

Better Me will go to be early and get up early. Every day. I already do both of these things, so doing 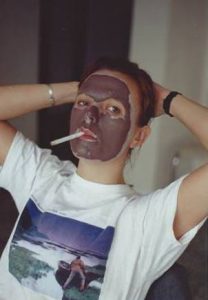 Am I now a Better Me?

them earlier isn’t anything new. It’s just doing them better. Better Me will write her blog posts regularly. Twice a week? That’s perhaps too much to hope for, but the blog that I already write each month could become once a week which would at least be better. Better Me will answer her emails as she receives them and not make a list of ’emails I’ll reply to after I’ve read 10 banal Facebook posts and bought two unessential but quirky and discounted items off Amazon’. New Me would be so frighteningly efficient she would impose an embargo on all frivolous internet activity until the necessary admin had been completed and probably filed too. Well, that is so not going to happen. New Me it seems, would just generally be a sanctimonious, humour-amputee. But Better Me is going to be lovely.

And where does Old Me come into this? How many times have you said, as the clock struck twelve on December 31st, that this was the year to start again, finish old projects, learn something new, lose weight (yawn), get fit (Zzzzz) or change career (all the time)? Why don’t we ever say that this is the year to learn to either accept things or learn to think about them differently? We’re always looking to change what or who we are. That, in itself is not really a bad thing. A 20-a-day smoker – and they do still exist – should definitely be looking to change their ways or they won’t be seeing many more decades stumbling through a haze of acrid fumes to the nearest Prosecco bottle. 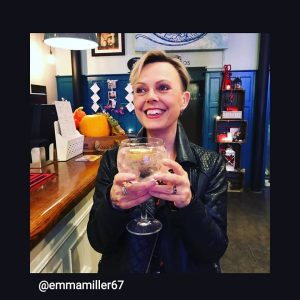 Better me doesn’t smoke. But that gin is huge!

But sometimes we need to look at how we behave and how we can modify that behaviour to see benefits. I’m challenged with a brain that scatters thoughts randomly rather than creates a focused beam. Any shiny object in my field of vision becomes the object of my attention. The metaphorical shiny objects are worse than the literal, by a long way and I have a list of projects to begin that is far longer than my arm; the novel is obviously the biggest shiniest object and it sits on my future timeline like a great fat sunset, beautiful but very distant.  This burden of what to choose makes choice difficult, so much so that I constantly vacillate, working on each a bit at a time and rarely completing any of them. Even my child says I have problems with time management and distraction. But so does he, natch. That apple didn’t fall far from the tree.

Old Me would have been hypercritical, frustrated and full of self-criticism None of these feelings are constructive but they are entirely natural. The trick is to recognise that they are not and never will be productive in themselves. They should be interpreted simply as signals that I need to use strategies to manage my time and my reactions to what I consider to be failure and underachievement. Old Me did a lot of comparing to others and she still falls back into that whingey way of thinking on her less sunny days.

Better Me doesn’t say “I’m useless” because I’m not useless at most things I attempt. However, it would be entirely correct and honest to say “I’m useless” if I were referring to my juggling skills. Or skiing.  But I don’t want to juggle while I’m skiing so that doesn’t bother me.

Better Me is a new model of the Old Me and has learned that self-criticism has to be reserved for the times it’s really needed and it’s true. I’ve kept all the best original features and I’m working on the parts that don’t work so well. And what of New Me and New You? The idea is preposterous and unattractive. Why scrap something that has served you so well for so long but it’s just not perfect? Take the time to re-examine the bits you’re not so happy about. Discover the strategies that create positive changes and that make you feel good. Love all the great bits and tweak the not-so-great bits and come out of 2020 as a happy, still not perfect but Better You.

What do you think about New Year Resolutions and New Year New You?

Have you tried radical changes to your lifestyle and did it work?

This site uses Akismet to reduce spam. Learn how your comment data is processed.